The current generation growing up right now has absolutely no clue what they are missing out on.

In 1971 at the height of the Evel Kneivel craze, I found a pair of motorcycle handle bars that my Dad had changed off the Yamaha 250 Enduro he was racing at the time, laying in the garage.

It took me quite a while to get them clamped on my bike because the diameter was smaller, they kept flipping back and  forward on me and dumping me in the street until I managed to find something to use as a bushing around them for the goose neck clamp to snug up on.

I started out with something that looked a lot like this, 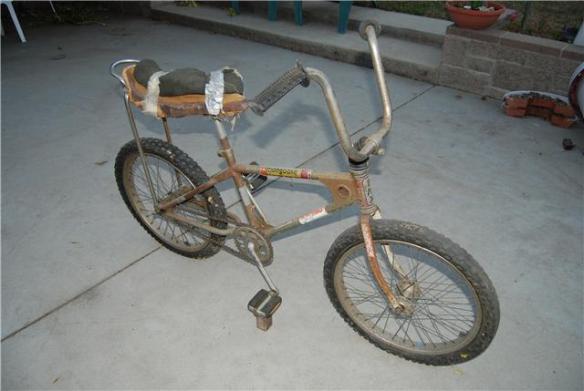 Then I got rid of the Banana seat and put a regular bike seat on it. Then I took the fenders off and  put knobby mud tires on the front and back wheels.

I literally built a BMX bike from parts when I was 11 years old.

It kinda turned out like this but not as nice and the motorcycle handlebars were way too big, plus it still had the huge front sprocket.

Oh yeah, we did that.

We had an exact 100 foot football/hockey/baseball field  out in the street in front of the house. We measured it and spray painted ten foot markers and goals on the asphalt.

One day we decided to build a ramp to see how far we could jump on our bikes.

There was a slight downhill grade in the street but not much.

The ramp was two feet tall and four feet long.

I pedaled my little ass off on that bike and jumped 32 feet.

Doesn’t sound like much, especially compared to the outrageous stunts you see these days but remember, this was literally almost fifty years ago now and on asphalt.

32 feet was a loooooooong fucking ways back then.

All my brothers, cousins and neighbor kids tried to see how far they could jump, trying to beat that.

My little brother almost beat me but when his bike hit the ground the frame broke in half and down he went in a heap of flying parts, elbows, knees and tennis shoes.

Tore his ass up good and literally broke that bike into two pieces.

Helmets were unheard of and still in the unconscious mind of some over protective control freak who had yet to rise to power.

Speaking of such things, anyone else remember this shit?

The Devil’s Spit in a bottle complete with the glass applicator.

That funky Phosphorescent Pink color, the smell of anti septic, the fiery burn, the wicked smile in your Mom’s eyes every time she got to break it out…

My two Step brothers had just gotten brand new bikes from their Dad and oh boy was everyone else jealous.

These things were cool man.

Except theirs had Sissy Bars on the back and Orange seats to match.

Spendy as Hell for a bike back in those days too.

Just like my cars now, even then my bike was a rolling multi colored mismatched collection of used parts.

The youngest hit the ramp as fast as he could go on that brand new fancy bike, he was only seven or eight years old and couldn’t even sit on the seat when he was pedaling, let alone work that fancy gear shifter.

He pulled up too hard on the handlebars,  landed on the back wheel  too far back and the front tire went straight up in the air. Fifty years later I can still see the three inch long  bright blue spark glowing in the middle of a dust cloud as that Sissy Bar drug on the asphalt.

Somehow or another he got the front wheel to come back down but by then he was completely out of control and just along for the ride at that point. His feet weren’t even on the pedals anymore, they were dragging alongside and behind on both sides and the only thing keeping him anywhere near attached to that bike was the Death Grip he had on the handlebars.

The bike decided to turn left into the driveway, he shot across that damn thing at full speed and hit a small pear tree that had two big branches in a fork and went over the bars and wound up stuck in the fork of that tree four feet off the ground just like something out of a cartoon. It took three of us to get him unwedged and back on the ground.

Fucked that brand spanking new bike up like nobody’s business too.

This was a typical Summer afternoon in North East Portland for us back in those days.

The fucking neighbors hated our asses and we went out of our way to fuck with them out of sheer boredom.

These poor kids  growing up now in this Electronic Age are severely deprived compared to us back then the way I see it.

Someday I’ll have to relate some of the fun we had way out in the Boonies after we moved back to Coos Bay.

It was nothing for us to ride them little bikes twenty miles a day and out there in the sticks were old Logging roads that had grown over to the point they were just trails.

Hills, trails, creeks the Bay and all kinds of mischief.

That was right around the time they came out with Pong now that I think about it.