I’m sure by now you have heard about the drone strike yesterday that took out a major source of terrorist activity around the world with the killing of  Qassem Soleimani and several other terrorist dirtbags.

It appears we just sent a few more to Hell.

Reuters isn’t saying just who got whacked a bit ago but several other unconfirmed sources are all saying the same thing, this guy and 5 of his minions also just got blown to smithereens. 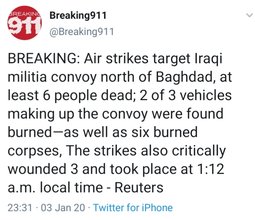 If I was one of the assholes in the Iranian/Hezzbollah terrorist business I think I would be cancelling any travel plans I had and be planning on some Netflix and Chill for a while.

Trump said he was going to go after these fuckers a couple of years ago.

They seriously stepped on their tackle when they arranged to have our embassy attacked in Baghdad the other day and also killed an American contractor over there.

Trump was very quick to send reinforcements and made damn sure everyone was aware of the difference of his response and the lack of one in Benghazi several years ago.

The Mullahs in Iran and their proxy wars just had it all dropped right back on their front porch in broad fucking daylight for all to see.

Trump pretty much just told them that if they want to play, it’s Game On Bitches.

Miss Lindsey tweeted over his shoulder like a girlfriend talking shit in a street fight that these Iranians best watch their step or we are going to start taking out oil fields.

Basically the only source of money they have.

Trump isn’t afraid and he sure as shit isn’t as stupid as some people would love for you to believe.

He doesn’t want war with Iran.

He wants the Iranian people to stand up, revolt and throw these religious freaks out on their asses.

Our beef isn’t with the Iranian people, it’s these Muslim hard liners.

20 thoughts on “Trump Has Taken The Gloves Off”