I’m sitting here with my thumb in my ass, surfing the net and occasionally talking to the wife when all of a sudden my phone starts going berzerk and flashing at me with some kind of alert.

Well now, ain’t that about enough to pucker your ass

Me and her looked at each other and said, now what?

There is nowhere to hide from one of those sonofabitches around here. None of the houses around here have basements and cellars are a quaint little notion from the past.

As I got up to go take a peek outside and get an idea of whether we should jump in a rig and bail out, the kid texted the wife and said he could see it from across the river at Jantzen Beach. We went out to look and there was a MASSIVE Jet Black Cloud a couple miles to the West of us.

We watched it for a few minutes, the new neighbor came out and asked if this was normal, apparently they’re from South Dakota. We said no but we do get them occasionally, She asked if there were Tornado Sirens here and we said no, just the phone alerts. We watched the huge cloud move up to the North, I judged we should be OK as it looked like it was going to miss us and keep tracking North East by North beyond us so we came back in the house.

We sat down and then the television went to a Tornado Warning immediately after we sat down and it said one had actually been spotted in Orchards, which is one fucking mile North of us. It spreads out West of us too so I am assuming it was somewhere underneath that huge fucking thunder head.

Now the Weather on the news is showing pictures of multiple funnel clouds from pictures people have sent them from all around Portland.

About the only defense we have from something like that is to bail the fuck out and try to drive away from it if we get enough warning or get underneath the wrap around  wall desk in the little computer room my wife uses right in the middle of the house and pray there would be something left after it hit.

To be honest, I was about thirty seconds away from grabbing my Go Bag and getting the fuck out of here.

If that cloud had been heading even a little bit this way instead of North, I wouldn’t be here right now.

Before I hit the publish button, more news is happening. 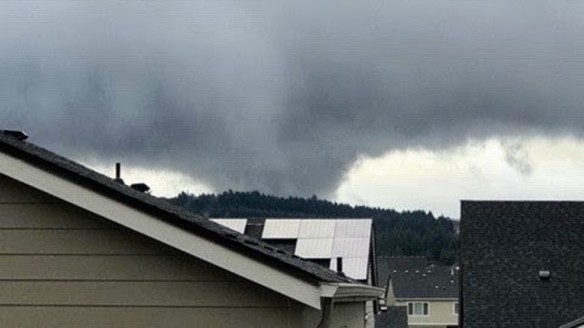 The National Weather Service issued a new tornado warning, this time for Orchards, at 7:47 p.m. Sunday after a tornado was observed.

PORTLAND, Ore. — The National Weather Service issued a second tornado warning Sunday at 7:47 p.m., this time for south central Clark County in Southwestern Washington. The warning is until 8:15 p.m.

“A confirmed tornado was located over Orchards, or near Vancouver Downtown, moving east at 15 mph,” the NWS reported.

The NWS reported that the tornado would be near Mill Plain around 8:05 p.m. and Hockinson around 8:15 p.m.

Other locations impacted include Sifton, Vancouver Mall, Minnehaha, and Brush Prairie, including the following highways in Washington:

Earlier Sunday, the NWS issued a tornado warning for Multnomah County at 6:47 p.m. after weather spotters reported a funnel cloud. The first warning ended at 7 p.m.

I am less than four miles away from that Vancouver Mall.

Fucker was a little too close for comfort and I can still feel the adrenaline hit fifteen minutes later.