In other words, I finally went out and tore into that fucking Bronco today.

I knew there were reasons I didn’t want to do that and I wound up finding several.

So for those who either don’t know why it’s been parked for the last month or two or are like me and can’t remember what the fuck I had for breakfast yesterday anymore, it’s been sitting because I went to jump in it and go to work one day, started to do a 3 point turn in the street to get headed out the other way and noticed a huge trail of coolant all over the ground right where I had just pulled away from.

Further investigation indicated it was coming from the back of the intake manifold on the drivers side.

That has now been confirmed.

After several hours of wrenching on the bastard and much, much cursing.

The further I tried digging into it the harder it got and it finally involved Big Fucking Breaker Bars, Big Fucking Hammers and Big Fucking Pry Bars.

Dirty SONSA, BITCHES that designed that thing, I tell ya.

There was already a bunch of parts removal happening when I got to this point but I had mentioned this little bastard before and wanted you to see for yourselves what it was I was bitching about at the time.

If you have never worked on a Ford you can be forgiven a bit of naivete, anyone who has wrenched on one of the bastards will just be nodding their head in sympathetic understanding.

On the 351 Windsor V-8 they made in that generation of Fords, there is  big fucking air intake plenum that curves over the top of the passenger side valve cover.

It’s a real joy to get off and it has to be removed to pretty much do anything to the engine it’s self. Things like valve cover gaskets, head gaskets or the intake manifold gaskets.

As fun as it is to get to the bolts, after you have unhooked several hundred completely unnecessary things like hoses, EGR valve, the throttle body and a shit load of little coolant lines, there are only six of them holding the thing down. Five of the six are reasonably easy enough to get to and take off.

There is one, however, that someone with a mean streak threw into the mix. 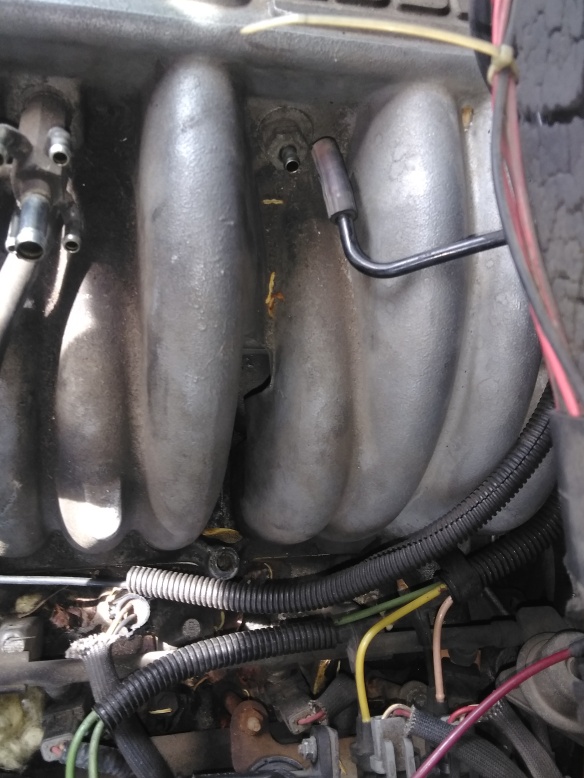 Oh wait, you can’t see that?

Yeah, neither can anyone else.

Here, allow me to give you a closer look. 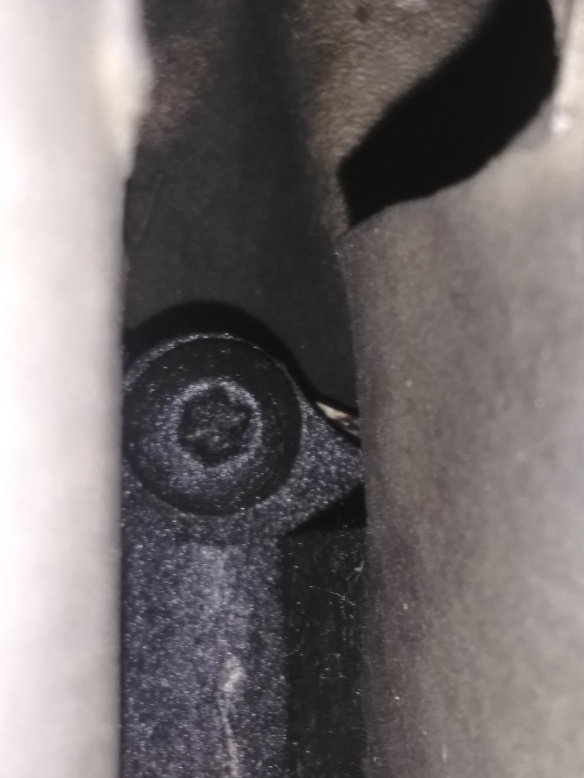 Get your imaginary electronic measuring calipers out gentlemen and measure the distance across that span and compare it to the width of the bolt head and then go measure a typical Torx head bit mounted in a 3/8’s drive socket.

When you get done with that, I’ll show you how that works.

That is what I wound up doing to get to that bolt the first time I ever encountered this particular automotive nightmare some twenty five fucking years ago. As you can see, it got kinda thin there at the end. It was just skinny enough at that point to get down in the hole and break that bolt loose.

I have had that ever since and know exactly where it is at all times because it made such an impression on me way back then.

That was, a Mac Tools Torx Bit Socket that cost me over twenty dollars way back in the mid 90’s.

This was long before I had ever heard of Harbor Freight Tools and that job came in at the beginning of the week. The tool trucks only showed up on Fridays so I was kinda fucked.

Now let me show you what you can use in this more modern age. I very strongly suggest you High Tail it down to Harbor Freight and pick this combination up. It has saved my ass countless times and I can’t recommend this enough for having on hand at all times.

Under twenty five bucks for both.

Add a couple of different lengths of 1/4 drive extensions and you too, can perform miracles.

That bolt is a Torx # 40. There is one of those bits in this kit. There is also a 1/4 inch socket to put the bit in. Stick it on an extension, play a little  of this

and out the little bastard comes.

Then you fight and struggle but eventually that upper plenum comes out and you can now start in on what you originally wanted to get at in the first place.

After unplugging and moving a bunch of wiring, tubes and other shit, I tried getting the fuel rail off the injectors. Ain’t happening Homey.

This is where I figured I had better check to see if there were any O rings in the gasket kit for those injectors. This is also where I discovered that the kid at the parts store had sold me EXHAUST MANIFOLD GASKETS and I had to run back up to the parts house before they closed.

No, the O rings don’t come with that, yes, for a not so small fee we will sell you some.

Back to the fucking house, fought the damn fuel line connectors for a half an hour, even with the damn disconnect tools and finally got them loose. Now to finally start loosening the bolts holding the intake manifold down.

On the very first one I tried to get to? 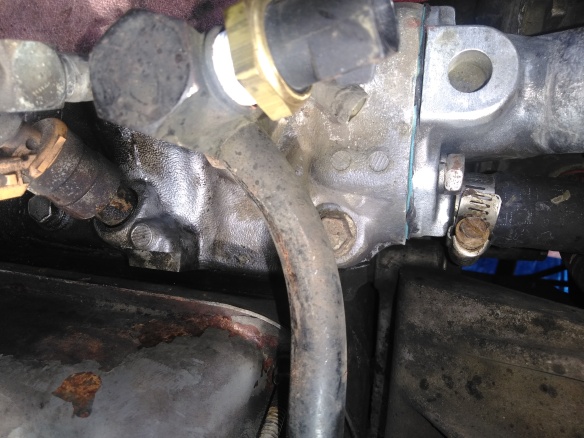 You aren’t getting to that bolt.

They want you to take the alternator and the bracket off so you can swing that metal tube back out of the way so you can access that bolt.

I fucked around for a good half hour with that and tried using seven different tools.

I wound up breaking a cheap 3/8’s to 1/4  socket adapter. I finally got pissed off, turned the damned thing as far as I could until it was jammed up against the valve cover, pounded a deep socket onto the bolt head and then pounded sideways on the socket.

This is where the real fun started. All that other shit was just a warm up.

I worked on it another fifteen or twenty minutes and it finally snapped off.

Even then it wouldn’t come out. It would turn and little piles of rust would start working their way out from under the bolt head.

I had to turn it and pry it up with a pocket screwdriver at the same time.

All of the manifold bolts in the middle were barely tight at all, they came unexpectedly loose as a matter of fact.

Then I had to climb up on top of the engine and get to the ones in the back.

Much rejoicing was heard.

For about two seconds.

The far back one on the left side was just as fucked as the one in the front but it was so awkward to get at that I finally went and got my 1/2 inch breaker bar, reduced it down and then could turn it without torturing myself.

Oh yeah, that fucker broke off too.

Seized up tighter than a Nun’s Nether Regions

Then on to the one that started this whole fiasco.

The back one on the drivers side that had started leaking.

I didn’t even have to turn it.

It was already broke off. That explains the sudden leak.

So now, I have not one, not two but THREE broken off bolts, in the heads, with two of the damn things all the way back at the fire wall. 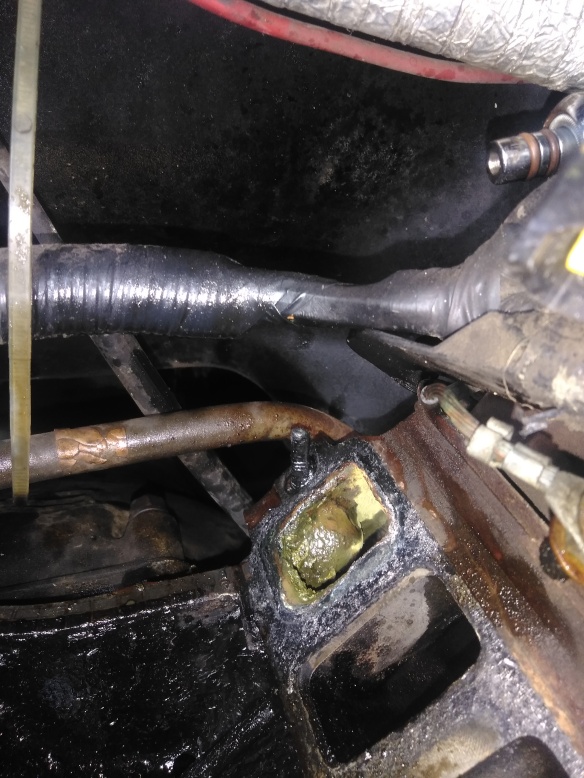 This was one of those days that really test your will power. 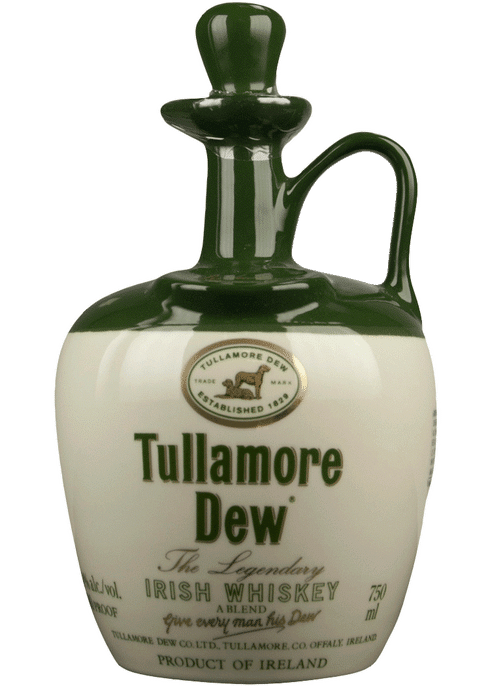 I hosed them all down with a couple of different penetrating oils instead and shut the hood for the night.

There is guaranteed to be more fun and games tomorrow, If it doesn’t rain.

It started in about an hour ago and the thunder storms blowing through have been scaring the shit out of the cats.

The weatherman said it’s supposed to rain. If it does then I will just keep soaking those bolts down and find some other little nightmare to ease into.

It ain’t going to hurt my feelings any if the thing sits for a few more days.