A Reddit user who took money earmarked for his six-month-old daughter’s college fund to buy back 1972 Bronco petitioned others asking whether or not he did the right thing.

User ‘my1972pony’ had, as a teenager, a classic 1972 Ford Bronco his dad bought for him — he would drive it to high school, and had lots of great memories tied to the truck.

He and his dad would spend hours working on it, found a real “true passion” in the off-roader, and it even brought him and his father back together after a rough patch.

When he was 19 however, he decided to sell the Bronco, and two months later his dad died of a heart attack.

AITA for using money we “earmarked” for our 6 month old’s college fund to buy back the exact 1972 Ford Bronco I owned as a teenager? https://buff.ly/313vhpR 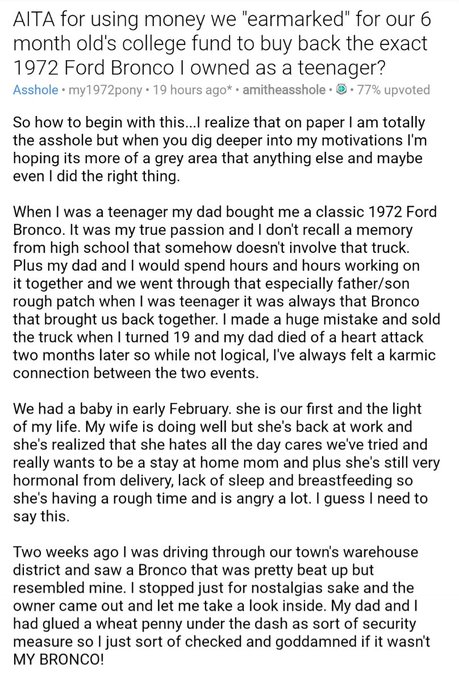 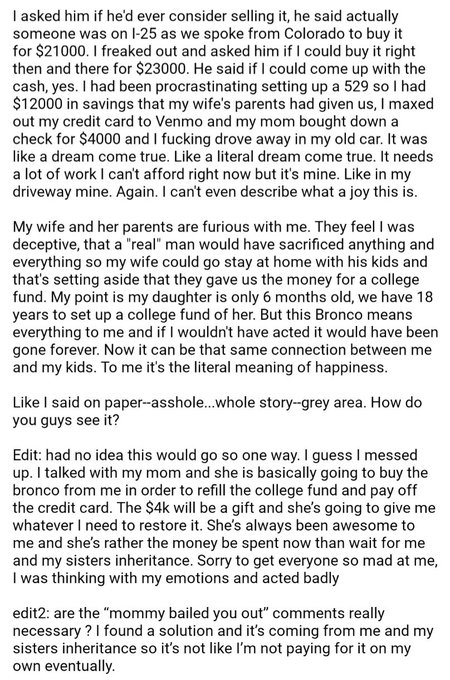 447 people are talking about this

Fast-forward to 2019, and ‘my1972pony’ gets married and has a daughter, and one day while driving through the warehouse district, spots a Bronco that closely resembled the one he used to own. Way back when, he and his dad glued a penny under the dash, and when the seller let him check for it, the penny was there, confirming this was indeed his high school ride.

It sounds like a heartwarming story between a man and his reconnection with the last memories of his father — until you realize that $12,000 of that money was given to him by his wife’s parents to set up a college fund for their daughter.

Eventually, his mother bailed him out on the college fund. That should fix everything, right? Maybe, if he hadn’t lied to his wife and said he sold the car to get the money back. Sorry dude, you messed up this one.

If he paid 23 grand for it and that is about the crazy ass going rate these days, imagine what that fucker is going to be worth in twenty years when the little chick is college age?

13 thoughts on “She’s Just Going To Wind Up Being A Stripper Anyway, Right?”